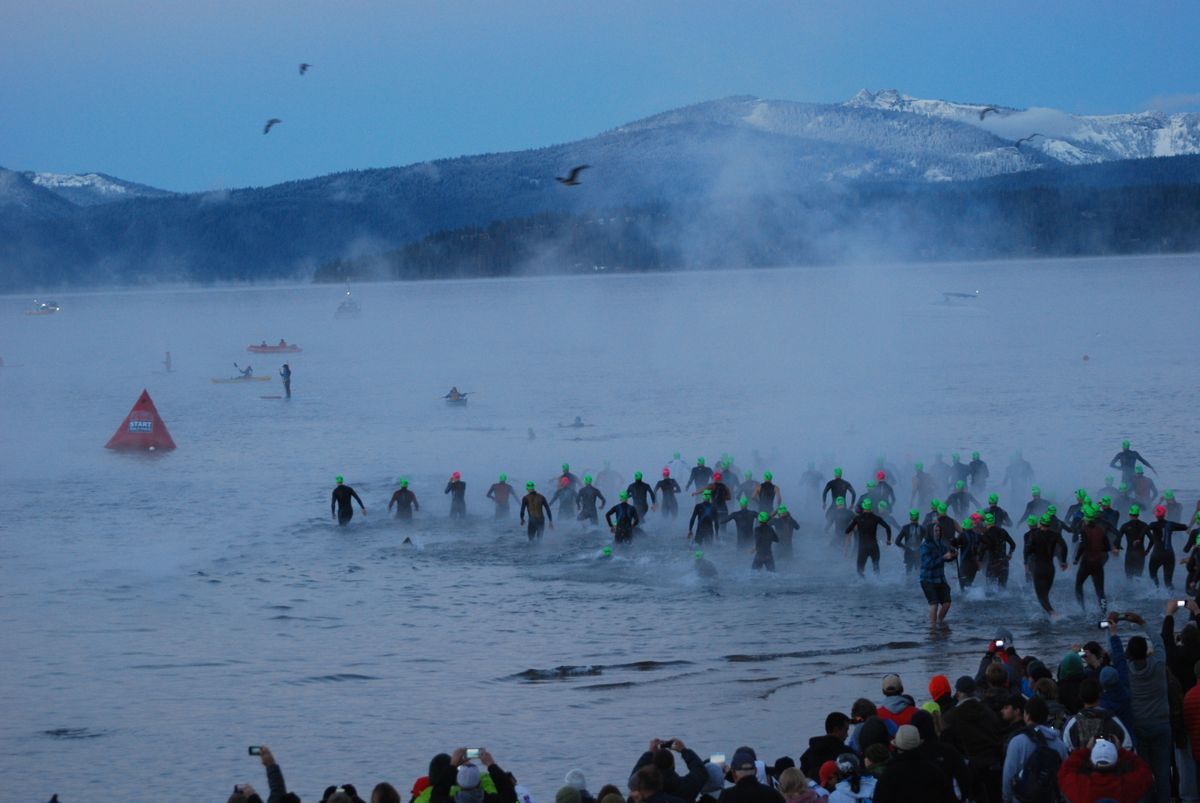 It’s the day before September 22, 2013 and the cold front that has been anticipated all week for Lake Tahoe has blown in right on time. In time, that is, to boost the local weatherman’s confidence in his cold and snowy predictions. But for the 2000 triathletes prepping for what will soon be known as the toughest Ironman on the circuit, the timing couldn’t be worse. All week the weather had been picture perfect in the high sierras…sunny blue skies with temperatures and humidity that seem to have been custom ordered for endurance racing. That was all about to change and spirits were fading for fast times at the inaugural Lake Tahoe Ironman.

As athletes completed the obligatory pre race bag drop along the beach at T1, off to their left the water in Lake Tahoe was being whipped up into a frothy mess by the winds of the approaching cold front. 3 foot white caps were visible all along the 21-mile length of 1000-foot deep lake. A few intrepid athletes could be seen slowly donning their wetsuits, thinking twice if a pre race swim was a good idea. Surly their thoughts were of a warm hotel room as opposed to the 56-degree, sea sick inducing lake. It seemed impossible that the swim would even go off tomorrow morning as the few athletes that have finally entered the water from the desolate beach soon disappear, swallowed up behind the waves of the lake. After months of preparation, how many athletes were now thinking, “There is no way I’m racing tomorrow. No way!”

A light rain started to fall as the competitors made their way from the beach at T1 to head over to drop their T2 bag at Squaw Valley, 10miles away. The Olympic rings greeted the athletes as they headed into the village that hosted the 1960 winter Olympics and will host the finish line. Along with those colorful rings, a driving rain also greeted athletes as the cold front thundered closer to Lake Tahoe. “There is no way!”

A few athletes racing tomorrow have seen conditions like this before. Back in the late 1980’s The Worlds Toughest Triathlon was held on the south side of Lake Tahoe in mid-August. On more than one occasion it snowed on portions of the bike course during the race. Hot tubs and warming tents had been set up back then to warm the life back into the 250 racers as they completed each leg. That was August, in the ‘heat’ of the summer. Tomorrow, race day, is late September and summertime in the mountains is fading fast.

That night, as athletes progressed through their pre race routines, the driving rain of earlier has now morphed into a full-blown snowstorm. The race is only hours away and on schedule to take place despite the dismal conditions outside. As quickly as the front has appeared, the weather prognosticators predict clear conditions for race day. Despite sunny skies in the morning, the cold weather and difficult bike course will result in the second highest DNF rate of any Ironman. Unbeknownst to 21% of the race competitors, pre race rituals and year-long training will not help them make the cutoff times or battle the elements…the Lake Tahoe Ironman results will not include them. And after years of chatter that Ironman courses have become too easy and the sport too soft, Mother Nature and the course designers will put that argument to rest. The Lake Tahoe Ironman will soon be considered the world’s toughest triathlon.

As predicted, race morning brings crystal clear conditions and the bank thermometer across from the beach flashes 27-degrees. Typical Ironman race morning attire consists of shorts and flip-flops. Today the race venue appears more like the base of a ski hill in mid winter. Down jackets, thick winter mittens, and thermal hats are seen on every athlete. T1 bags, that were left outside all night by race officials, are covered in ice. Many athletes were treated to wet cycling gear. Not ideal attire to zip through the frigid mountain air on the 112- mile bike course.

As the slow progression of the wetsuit clad athletes made their way to the beach, they were greeted with ice-cold sand on their bare feet and something even more unnerving…fog. Though the white caps had disappeared with the passing of the cold front, the frigid temperatures that were left behind resulted in a thick layer of fog over the relatively warm lake water. Relative water temperature was an icy 58-degrees. The fog resulted in monumental navigating difficulties. Swimmers were swimming at right angles to each other on account of not being able to see the next buoy. Dozens of swimmers were pulled out of the water within minutes of entering as their mammalian dive reflex literally took their breath away. Those that did continue were treated to crystal clear water visibility and took some comfort in the warmth of the water. The cold mountain air was yet to come.

Transitions in triathlons are considered the fourth event. Minutes can be gained or lost in transition and triathletes like to brag about time splits here as much as on the bike. 2 or 3-minute transition times in an Ironman race are common. A quick change out of your wetsuit to reveal your cycling attire and you are off. Not today. Not at the soon to be crowned toughest ironman race on the circuit. 15-minute transitions were considered lightning fast. 30-minutes was not uncommon. One competitor took 90 minutes! Was it their cold extremities, the ridiculously crowded changing tent, or the layers of clothes each athlete had to put on? Yes, it was all of that, and more than a little time to think about what lie ahead out on the bike course.

Greeting the athletes as they stumbled through T1 with numb feet were their bikes. Usually a highly anticipated sight, today the bikes were unsightly because of the layer of ice that blanketed them. So much for late summer conditions in Lake Tahoe. No time to fuss, it was off onto the cold bike course to face two mountain passes that proved to be the undoing of many competitors. How cold was it? Some athletes were seen riding bikes in wetsuits…in an ironman!

The bike course seemed straight forward enough on paper. Two major climbs per loop, two loops. The major climb over Brockway summit was open and able to be ridden in the days and weeks before the race. The other climb, through an exclusive neighborhood of Northstar, was closed for any pre race review. That is until the day before the race, which was blanketed in snow. The little known climb through Northstar brought many to their knees. Twisting neighborhood roads absent of spectators and granny gear climbing sapped any remaining energy from the racers legs. The five-hour bike split, which is usually obtained by the top 10% of athletes, was reached by exactly 2 competitors…the first and second place overall pro athletes. The rest of the elite age groupers saw bike splits an hour longer than average. Many mid pack athletes were seen walking their bikes up the climbs, unheard of in Ironman competitions.

Marathons are always tough. Marathons following an icy swim and a frigid 112-mile bike require a monumental effort. What seemed to be a flat marathon course that headed out of Squaw Valley and past the Olympic rings was not. Minor inclines on the run course stopped athletes in their tracks as the cumulative effect of the cold and leg zapping bike course took its toll. Those lucky enough to finish before dusk were spared the quickly dropping temperatures back into the 30’s. Those that weren’t continued to race against mid-run cut off times and the ultimate cut off time of midnight. 1 in 5 of those who jumped into Lake Tahoe earlier in the day would not finish.

And this is where I stop lamenting on the goal race time I did not attain or on the Kona qualifying spot I did not achieve this time. Instead, I focus on the fact that I was one of the competitors that completed this race and I revel in the beauty that the mountains had to offer and the character that I developed along the way. It was an experience I will never forget and I will be a stronger person and athlete because of this cold and challenging day in Lake Tahoe.